Treasure in Darkness – Treasure at the Tip 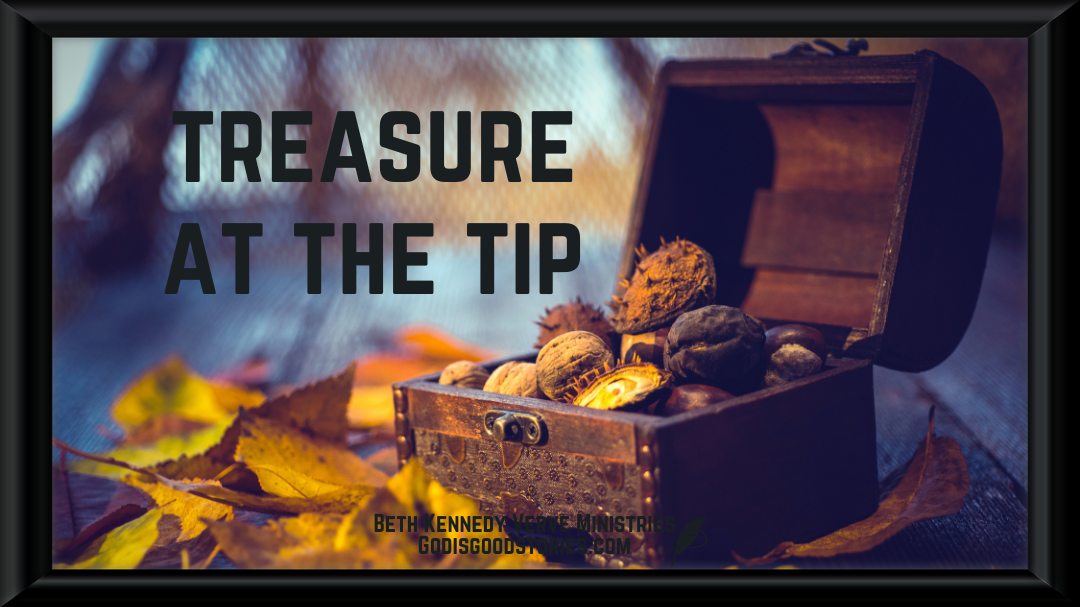 You never know where you might find treasure. You can find treasure anywhere you go. Treasure set in darkness might be right before you. It’s just having eyes to see. If we look to see, we will find many treasures in the darkness. God will reveal the treasured people for you to discover because God is Good!

A few years back, we hosted groups in our home. Paul was a retiring, gentle member of the group. He was responding to the Holy Spirit’s promptings to step out and pray for those around him as he went about his day.

At the time of this story, our church had recently hosted Christmas carols. During the carols, he noticed a guy sitting outside in the evening’s warmth. When he looked over, he felt a familiar Holy Spirit nudge to go chat. He was becoming more accustomed to such promptings, because he had learnt to recognize and respond to the voice of God in his everyday life. In having learnt how God spoke to him, he could lean into the heat beat of Heaven, and reveal God’s goodness wherever he went.

Feeling that nudge, he went to chat to the man at the carols – responding, regardless of his introvert nature.

He is a gentle giant–gentle and mighty!

He told me another God is Good story when he shared the carols act of courage. In this story, he shared how he found a treasure in darkness.

On his way to work one morning, Paul felt a prompting to drop some trash off at the tip (the rubbish dump). He obeyed, even though he had scheduled the chore for another time. Unknowingly, he headed towards a complete God set up.

Paul said he stood in the line at the counter to pay, and as he approached his turn, the young girl serving him looked at him and said something like,

‘You look like you’re an older man, a father, a husband. Will you please give me some advice about something?’

The girl showed him a picture saved on her phone screen of the Superman actor in costume, saying,

‘My partner doesn’t like me having this as my screen saver. He thinks it’s wrong and is really upset. What do you think?’

She had been taking a poll with people as they came to the counter to pay.

Paul looked at her and instead of a straight answer, or a word of judgement, he asked her a few questions (wise, gentle, mighty giant).

He asked her why she thought her partner would not like it and then explained that his wife had been through a tough divorce before meeting and marrying Paul and she would not like it if Paul had a photo of another woman (even dressed up in costume) on his phone. He explained it would be odd to do something like that. Paul then asked the girl whether her partner may feel rejected, or whether he had gone through anything to make him feel rejected.

‘Yes,’ the girl responded. Her partner had been through a nasty breakup/divorce.

Paul quietly suggested she reflect on that, and as she did, the light dawned.

He then said to this girl,

The line behind him continued to get longer. People were waiting to pay.

‘I would love that,’ she said.

So Paul prayed for her.

Paul had trash to drop at the tip.

God had treasure for Paul to find.

Because Paul is becoming more attuned to the voice of God as he goes about his day, he is finding the treasure in darkness hidden for him to find. He is loving that treasure, as God directs, and as he does, he is showing the world around him how loved they are. He is showing people they are valuable treasures, and he is showing them that…