out of the box – sleeping in storms

by God is Good | Sep 6, 2022 | God is good, God is good stories, knowing, Love, Power of the testimony, prayer, Prophetic lifestyle, Stopping for the one | 9 comments 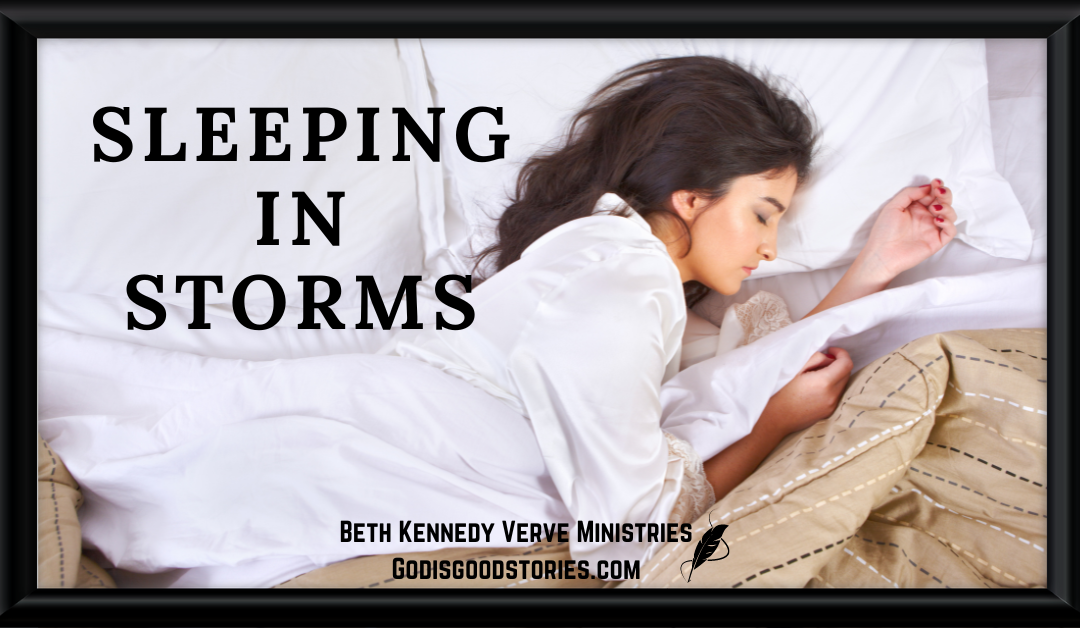 In being the church, rather than just going to church, we can release peace, so the community around us learn the key to sleeping in storms.

As I continued to step out in obedience and stop for the one at my daughter’s school, a waterfall effect occurred. Remember, we are streams of living waters.*

I found out a few years later that the teachers regularly discussed God and me in the staffroom at lunchtime.

After praying for Miss R’s teacher, word got around fast.

As the years passed, unbeknown to me, teachers hoped I would choose them to pray for them. I did not know this and was always a little challenged to overcome my fear of stepping into such moments.

One such teacher, a beautiful young woman, maybe in her early 30s, cried when I offered to pray for her. She said she was frightened, that God had overlooked her.

Oddly enough, I told her when I offered to pray,

‘Can I pray for you? It’s your turn. You are not overlooked. ‘

She responded with tears, saying,

As I prayed, I saw Heaven’s delight when she was born. I told her I saw the celebration in Heaven, the joy and delight of the angels, and I confirmed God had His sights set on her.

As I asked if I could hug her, she threw herself into my arms with a passionate,

The encounter seemed dramatic for her. She was so hungry for a touch from God.

She had a few more encounters after this. God was drawing her to Himself, through myself, but also through others.

Not long after my daughter started at the school, I met the new chaplain. After checking me out for a year, she agreed to start a prayer group together for the school. She would so often say to me that the staff coveted my prayers. I didn’t really understand to what extent until much later.

Some, like that teacher, who cried when I offered, were just waiting to be asked!

This teacher’s time had come. She was not overlooked, and I had prayed.

On another occasion, the same teacher saw God’s loving guidance manifest through both the Chaplain and myself. There was no collusion, just the Chaplain and I being obedient and responding to a loving God.

It had been a typical Melbourne Spring day. Sunshine in the morning proceeded with rain patches, more rain patches, and then rain, no patch, just rain, rain and more rain.

By about 2pm I prayed saying,

After my request/prayer, I then spoke to the weather,

‘In the name of Jesus, you will stop raining at 3pm.’

I thought nothing more about it until 3pm. The skies were cloudy, but clear and lighter, and so I gathered my raincoat and umbrella (‘oh, yea of little faith’ you may say; but I would say ‘wisdom’) and I joyfully made my way up to my daughter’s school, entering the grounds in a different way to normal. I was sensing God’s gentle guidance about the way I should go, the pathway to take.

Arriving early, I pondered what to do. Thinking of a few options, I felt God say, ‘just sit down.’ So, I sat outside her classroom, enjoying the moment of solitude while I tried not to feel like a goose for being so early.

Not much time passed when a teacher walked out of her classroom and said,

‘Hello. I was thinking about you a couple of days ago.’

She was all smiles.

She walked over to me, and as she did, I felt like I needed to ask if she needed a hug.

She did, so I gave her a hug and asked if she was ok.

Holding her in my hug, I released ‘Peace’ and said,

I then told her the story of Jesus sleeping in storms** explaining I felt this story was just for her. God wanted to be her Peace.

She gasped and said,

‘That is exactly the scripture that Rev P*** gave me.’

I explained He loved her and that the Bible says that through 2 or 3 witnesses He will confirm a thing.****

‘He is confirming this was your scripture. It’s one you can read, learn, ponder upon and ask Him for peace. Ask Him for what you need and ask Him questions about this scripture. Journal what you hear Him say to you.

‘I will pour out my spirit on ALL flesh…’

So here was God giving her a scripture for this season of her life, through the school chaplain and myself. Independent confirmation of who He wanted to be for her. Showing her he SAW her and loved her. He had her in His sights. He was teaching her to incline her ear toward Him. He wanted to share the key to sleeping in storms.

Amazed and excited, she jumped up and down, saying over and over how amazing it was. To be honest, I’m also still like a kid in a candy shop when it happens.

I am constantly in awe.

‘I know I get a real shock every time He does this too.’

She was quite teary, so I told her to call if she ever needed to.

Still excited at what God had done, she jumped around like a fun, joy filled firecracker. I could see why the angels rejoiced over her when she was born. She is a delight.

She bounced back into class, saying.

And she laughed and bounded and bounced, full of delight and joy all the way back into her classroom.

I was there early for her, and through this and other encounters, she was catching the fact that God loves her.

She learned God loved her!

So this teacher was waiting for me to step out and pray.

She had been watching me all this time.

Other teachers had been too.

Some came to Christ, others watched as miracles happened.

Evidence of a good, loving God that was loving them to Himself through myself and others.

It IS time to get out of the box. Let’s share the key to sleeping in storms.

For through us, through you, through me, the world will taste and see that…

***Rev P was the school chaplain, a beautiful evangelical Anglican