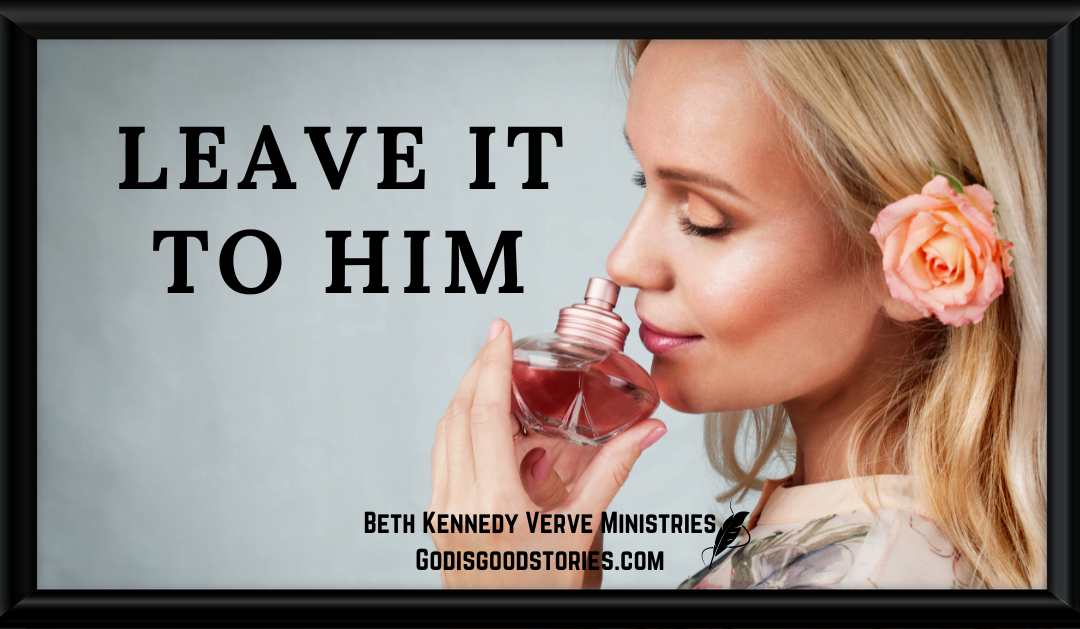 In the early days of stopping for the one, I had to learn very quickly how to leave it to God. The outcome, the reaction, the salvations, I could not control the outcome, just merely obey, and leave the rest to Him because, God is Good!

. I was the last client in the hairdressers late on a Thursday night, when I was told by the owner that she could not smell smells.

As she spoke, I felt God ask me to pray for her.

I offered, saying I believed she should be able to smell all the lovely smells there were to be smelt.

She agreed, but quickly added that she did not believe in any of this sort of thing.

It was winter time, and dark outside. With maybe 10 hairdressers standing around us in a semicircle, I stood, framed perfectly by their brightly lit, street window. Passersby, seeing there was something going on, slowed down to look at the show.

It was quite the spectacle.

This was very early in my time of praying for healing. It was also early in my stepping out and praying for someone who did not believe it would work. It was intimidating. I felt intimidated by her, by her attitude, and by the line of hairdressers watching what was going on.

I nervously placed my hand on her and prayed for healing. I prayed she would smell the fragrances of heaven and that she was to be totally well.

I asked her if she felt anything.

She felt nothing at all as well.

I was so embarrassed, mortified. But I kept it light, thanked her for allowing me to pray, and said my goodbyes.

I cried as soon as I got home. Standing in the kitchen, I said to my husband,

‘It’s too hard. I want to give up. Stopping for the one on the streets is hard. I can’t do it ay more. I’ve had enough.’

‘I think this is a step for her in her walk towards God. It would be a shame to stop.’

His words encouraged me somewhat, but I still felt lousy and angry at God for ‘making a fool of me.’

I felt completely responsible that she felt nothing, that nothing had happened. I also felt an idiot, knowing that I had to go back there for haircuts in the future.

Regardless, I shrugged it off and kept stepping out to pray for people. I also kept going to the same hairdresser for my haircuts, but it felt like a walk of shame every time I went there. Honestly, I hoped I would never see her again.

It was about 6 months later that the girl I had prayed for saw me.

‘I have been wanting to see you for ages,’ she said.

‘For the last 6 months, I have been smelling things I have never smelt before. I keep saying to people, “Can you smell that? I can smell that. I could not smell that before!” ‘

This came as a complete shock to me. I was feeling delighted, but also very convicted. I had nearly given it all up that dark winter’s night, and in this very moment, I was so glad I hadn’t.

Here was the encouragement 6 MONTHS after the event. Had I stopped because of discouragement, so many people would never have had an encounter with God.

It was an early lesson that I HAD to learn if I was to survive and continue the journey. It’s an essential one to catch. If we stop and step out for the one, we are not responsible for the outcome. We must leave it to God.

Whether they or I FEEL the anointing; whether we can discern the tangible presence of God is irrelevant.

To feel the anointing, while nice and reassuring, it is unnecessary.

God moves as he chooses, He reveals Himself as He chooses.

We are called to stop for the one and He does the rest.

This girl has since gone on a journey.

Further conversations and encounters occurred after this time. In one conversation, she said,

‘Every time I get around you, I want to cry.’

I responded by explaining that she was feeling God and His love for her. It was certainly not me, because at the time she mentioned, I was feeling stressed, tired and overwhelmed by life.

Her response was a flood of tears.

God impacted this girl repeatedly. Each time that I saw her over the years, she encountered God in some shape or form. It showed me then, and it continues to witness to me to this day, that God will be God. If we will just be real, do life, and obey, He will impact the world through us. It’s simple, it’s pure, and it’s easy. We leave it to God because…