Healing and roses from a loving God 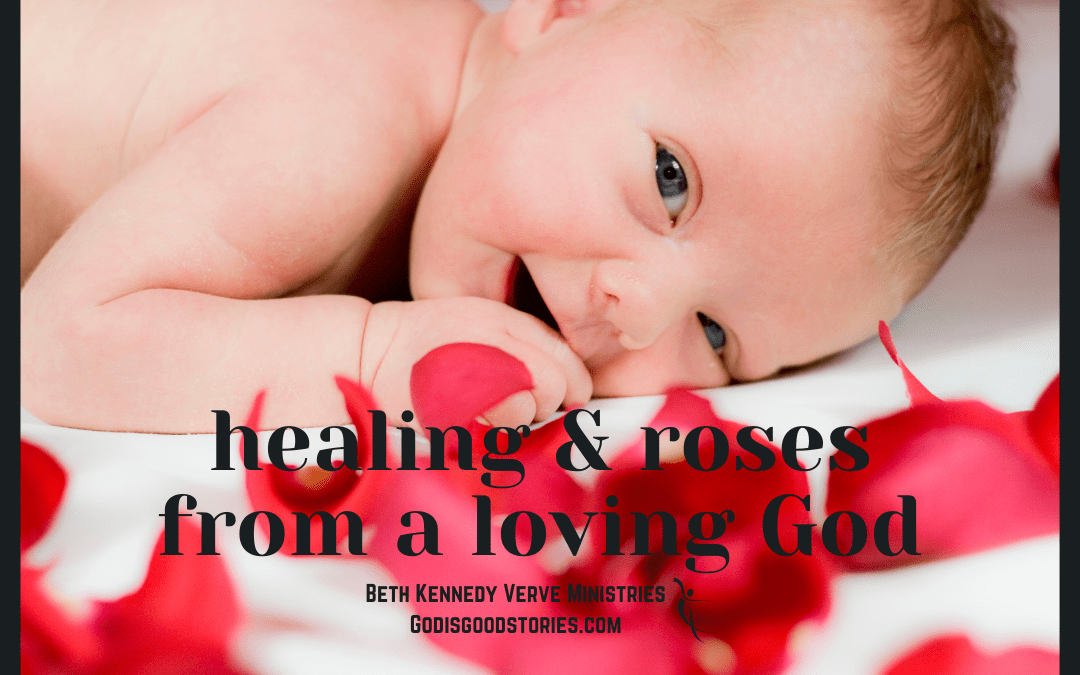 Healing and roses from a loving God can mean the difference between life and death.

People I have stopped for have accused me of taking too long to ‘tell them’ about God’s goodness.

It’s a brilliant question: What are we waiting for?

We change atmospheres, realities and we bless as we go.

We don’t have to.

My daughter had just changed schools. At the time I thought, even hoped, I could ‘fly under the radar,’ just for a while. But God has us all positioned for assignments as we go wherever we go. He had another idea, and it certainly was not leaving me to hide in a closet.

Healing, loving, encouraging, giving. We are salt. He wants to sprinkle us throughout society, to release His flavour, His fragrance, and as we do, it makes a difference.

The week my daughter started at this new school, I bought her teacher some flowers. It was to recognise on International Teacher’s Day, but it was also a gift to thank her for taking extra care of my girl. She had gone well beyond the call of duty, and I was grateful. The flowers I gave were pink roses; the colour chosen by my four-year-old son.

‘They must be dark pink, because she is beautiful!’ he had declared earnestly.

On this occasion, I missed her, so the school receptionist put them in a vase and left them on her desk in the hope they would last the weekend. They did.

Two weeks later, Mrs R kept ‘popping up’ in my mind, so I prayed for her. I knew she had not been well, and as I prayed, I felt to purchase some more roses. This time, I ‘saw’ in my mind’s eye a picture of red roses.

I argued with God about getting more flowers. Was it just my imagination? I sought for an answer and the inclination would not let up. It was something God wanted me to do, so I did it, feeling a bit of a dill since I had only just bought her some flowers two weeks prior.

These roses I knew had to be red. They were a gift from God, a gift to say ‘I love you’ and what better to say that, then red roses?!

I was running late for school pickup and it was a scorching day. Not a day to be running late, or racing through the shops to find red roses.

‘You better make it possible for me to get there on time,’ I told God. To be honest I felt a little miffed at the assignment.

Well, I didn’t get there on time. I ran late. I was so late I really had to rush with my four-year-old in tow.

Sweltering, I ran into the classroom. There was no Mrs R!

I ran to reception and spoke to the girl there.

In fact, she had gone home early. Ill.

Feeling foolish, I lifted the flowers to show the receptionist.

I smiled, left the flowers on the desk and rapidly backed away, explaining I was a Christian and had felt that Mrs R was still not right, and had been praying for her. I told her I felt I needed to give Mrs R the roses to encourage her in a tough time.

‘I’ll immediately email her and let her know about the roses. She will be thrilled, but she will not be in tomorrow because of illness,’ the receptionist told me.

I was so embarrassed and a tad miffed at God. He knew she wasn’t there, yet He still wanted me to drop the roses off.

‘Perhaps I got the timing wrong,’ I thought. ‘Or, perhaps I got it wrong altogether, and had not heard from God at all.’

But then I thought, as I so often do in these circumstances,

‘Well, I know You had wanted me to do this, so regardless, I tried to be obedient.’

I kept praying for Mrs R.

The following day (Friday morning) I got an email…

I just wanted to express my thanks for the beautiful roses, you are extremely thoughtful! Hopefully, a few days of rest will have me feeling back to my usual healthy self.
Have a lovely weekend and thanks again!
Kind regards,

You are welcome – in fact it was on a ‘gut feel’ that you were having a pretty tough time, and as a Christian family we like to encourage people when they are having such times, especially when they are put on our hearts to pray for them as you have been for me (this reads very awkwardly and I had hoped to verbally explain)… in any case, I have been praying for you as prompted, and felt that God wanted to give you the flowers and little chocolate … a ‘kiss from God’ so to speak to encourage you in whatever you are dealing with… but, as I said, much easier to verbally explain than in writing.

I have learnt through experience that when I feel a prompting like I did yesterday, it is best to act on them, rather look like a dag (authors note: ‘dag’ is an Australian term meaning ‘look silly’) than miss it …

Rest well, and have a lovely weekend.

‘I will explain better when I see her next. Either way, I have shown my colours!’ I thought.

The following Monday, I went to school pickup. It was a really tight turn around with ballet and tennis drop offs for the two children.

I arrived a little early and Mrs R came out to me to say ‘thank you’ again.

I confirmed I was a Christian and said,

She looked at me in shock and said, ‘Was it instinct?’

‘No, it’s called being prophetic, hearing from God. We can all do it,’ I replied.

Holy Spirit swirled as I spoke. She could feel it too, and she teared up.

A colleague had dropped the roses off for her that same night.

‘It was so strange because it lifted Friday afternoon.’

From that time on, she was fine.

She put 2 and 2 together and realised the timing of the prayer, the roses, the email. She knew it was a miracle.

She stared at me, incredulous.

‘Stay there. I want to talk to you some more,’ and she turned to dismiss the children from class.

I knew I was running late, but I also knew this was a God appointment, and so I put my agenda on hold, and waited.

She came back and looked at me again and said,

So I told her again. I had felt I needed to pray for her that afternoon. I had bought the flowers for her, but I had missed her, and I felt a dill.

‘The flowers were from God,’ I confirmed. ‘It is His way of letting you know that He loves you, you were on His heart.’

I then confirmed we could all hear from God.

She was still teary, and was saying over and over again,

‘… that someone would bother.’

She confirmed she had felt loved and cared for. She felt,

‘… so touched that someone would bother.’

Unfortunately, at that moment, a child threw a tantrum and Mrs R became flustered. Even though she came back to me, the ‘moment’ was gone for her.

Regardless, I knew it was a moment she would never forget..

Yes, there is a risk in stopping for the one. They might laugh at you, reject you, mock you. There is the ever present risk of looking silly.

But then there is also the ‘risk’ that we may just impact a life for God.

When we stop in response to His heart for the one, we show His Love, and a life might transform. If we will just stop and give it a go. If we will choose to step into who we are all called to be as Christians.

We must be people who bother. We must learn to stop for the one because…

What I did not share with her at the time was that I had the strongest feeling she was in danger of miscarrying. I just knew that I knew that I knew this. So, as I prayed I prayed with purpose. She later shared she had begun to miscarry. It would have been her second loss. She was simply amazed that the bleeding stopped Friday afternoon around when the emails were sent and received. She put 2 and 2 together, but at the time she could not share because she was not yet at 12 weeks.

Many months later, Mrs R gave birth to a beautiful little girl and called her Philippa Beth. Interestingly, Philippa was the name I was going to be given, but my parents changed their mind and called me Beth instead.

So, who is waiting for you to bother? Will you stop for the one? It’s worth it for the world will taste and see that…