giving more than he thought…

by God is Good | May 31, 2022 | God is good, God is good stories, God is Good!, hearing internal, prophetic evangelism, Prophetic gift, random act of kindness, Stopping for the one | 2 comments 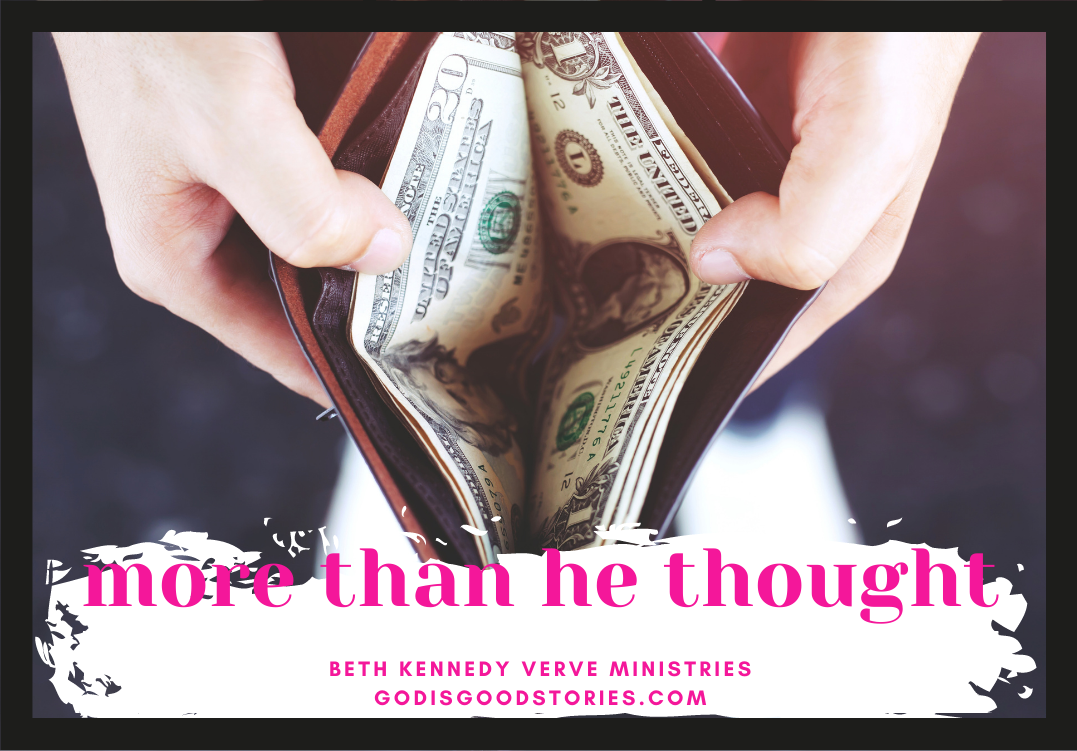 I adore this testimony from one of our most loved friends. He is a subscriber to our God is Good Stories newsletters and one of our local prophetic community.

He makes me laugh.

Just a quick, not so short, [sorry] testimony.

I thought I knew how much cash I had in my wallet, but it turns out God is a better accountant than me!

I have lived in this suburb for many years now. Demographically, there is a range of diverse income levels. You can tell by the cars & the type of homes. However, I have seen no one that you would describe as destitute.

It wasn’t until 2020 when covid hit I noticed the occasional person begging outside our local supermarket. By that I mean sitting on a milk crate or rug with a sign that would state the obvious, ‘homeless,’ ‘need work,’ ‘lost my job,’ etc. There were the usual 3 or 4 regulars that would turn up every 3 or 4 weeks, almost in rotation.

Sometimes I would stop and say, ‘G’day.’ Other times I would walk past as if they were invisible. Those times, I could almost feel the sting of the hand of conscience as it slapped me across my heart.

I was reluctant to give them cash, thinking they would only spend it on cigarettes, alcohol, or drugs. Mostly I would buy food, drinks or snacks of some sort, and despite what I thought, I sometimes gave cash. It really all depended on what I felt God wanted me to do. I would give them their parcel of goods on the way out, which they were always most appreciative of, have a quick chat about where are they were sleeping.

This went on for most of the covid period, then they just stopped coming….

A new face appeared a few times outside the store. I walked past & said ‘hello.’

No prompting from God for food or money, yet!

This fellow was different. No signs, no messages about his situation. Just a handkerchief on the ground to place any donations. So far, there was none.

As I went into the store, I felt the nudge from God to do something for this fellow.

‘I’ll get some groceries,’ I said to myself.

But God said, ‘Give him some money.’

And God said, ‘Give him some money.’

So I compromised with God. Never a good thing to do.

I knew I had one medium value note left in my wallet, so I said to God,

‘I will give him whatever I have in my wallet.’

Thinking that the groceries I would have bought him would probably cost more than the note in my wallet, I figured I was on a winner!

I purchased my own groceries, paying by card and proceeded out of the store.

As I got close to the fellow, I pulled out my wallet to get the medium valued note out.

Well upon opening my wallet, 3 times the amount that I thought I had was in there. I was positive I had spent more during the day.

So I handed over the cash, and we chatted.

Turns out his car needed fixing. It was the battery or the alternator, and it wouldn’t go. He needed cash to get it repaired, to get to job interviews.

He was so thankful.

I guess God was right, food would not have repaired his car.

If we lean in close enough to hear what God has to say, and obey, what a blessing it can be…

Giving generously is always God’s way, but the form of giving may change. Whatever way He asks us to give, it will always bless if it’s in response to God’s heart because…