He discovered he was loved (part 2) 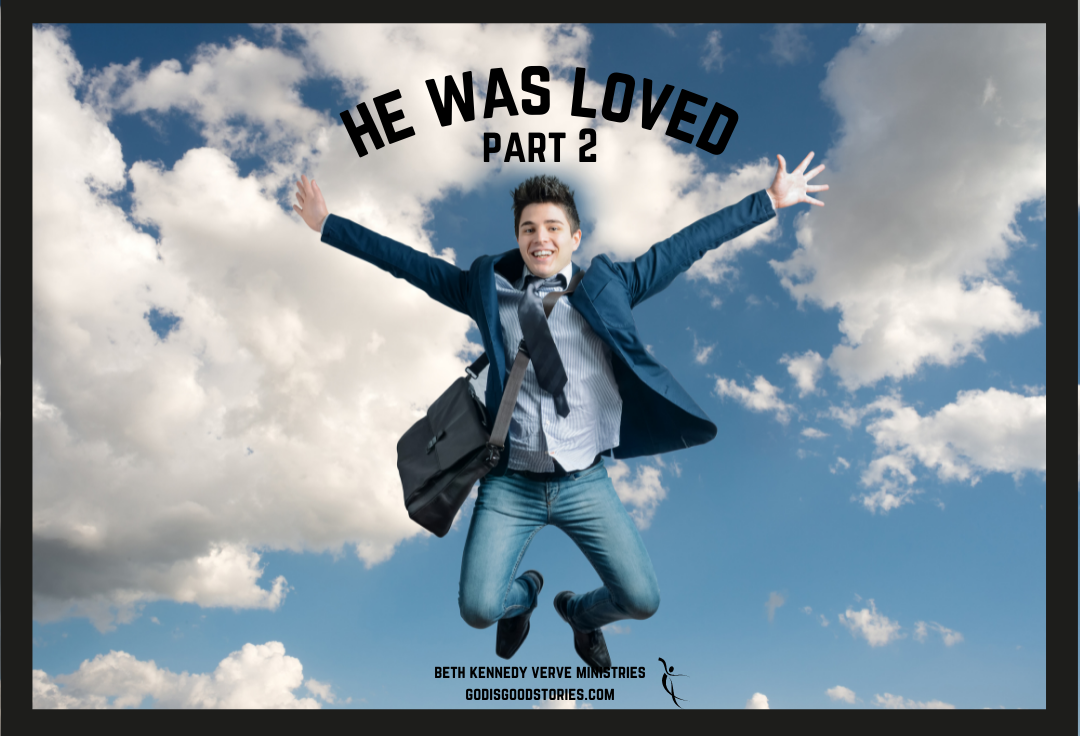 The impact of knowing he was loved…

The impact of a prophetic word can be far-reaching and life changing. Sometimes we have no idea the impact of us stopping for the one and releasing a loving prophetic encouragement has; but, if we are fortunate God will show us.

This is part 2 of a 2 part story. Part one can be read here

I was at the salon again. This time my son was having his hair cut.

While at the washbasins, a young mum needed encouragement, so I offered to pray. I told her how God could speak to us and told her the story above.

As I told the story, the young man washing her hair stopped short, interrupting our conversation.

I looked at him.

There stood the same young man. Unrecognisable. He was still effeminate in his mannerisms, but all the aggressive dress, the makeup, the nail varnish, the jewellery, the harsh behaviour and forcibly affected speech were gone. He had clearly settled into who he was. No longer was there a need to assert his sexual identity. Here stood a gentle, beautiful man.

‘You do not know the impact of that day. The paper you gave me I read every day, every morning. I showed everyone who would listen to me. I still have it today.’

He reached into his pocket, and from his wallet he pulled a worn, frayed piece of paper. Sticky tape now held it together along the seams where it folded. You could see he had read and reread it many times over.

‘You do not know what this meant to me. What you did… this changed my life.’

He shared how he had felt so loved and accepted. He said he had been so impacted by what I shared about the Father’s love for him. The impact was clear before me in his demeanour, but most important for him was that he had chased his dream. A dream he had previously felt unqualified to chase, and so he had cast it aside.

From that day on, he explained, he completely changed his life. He had enrolled to study creative writing, and was writing science fiction novels – the thing that truly captured his heart.

I looked at him. He was at peace. Gone was the young man whose attitude said ‘accept me.’ Instead, there was a gentle, articulate person, his face shining with the promise of being loved, accepted, and chasing down his dreams.

In that moment, and since, I have reflected.

Had I addressed anything but the Father’s heart for him, I would have heaped more condemnation upon his shoulders. Now, the school I attended taught that we should leave people feeling blessed, but they never taught me to check what we should release in a word and what we should hold. They never taught to look further, if the first thing I saw was not reflective of love. Sadly, they did not teach that words of encouragement from God should only be ‘encouraging, comforting and strengthening’ (in line with 1 Corinthians 14:3). They taught we should leave the recipient blessed, but they did not say that we were not to address the negative that we saw.

It was in the moment of the Holy Spirit rebuke I learnt a powerful lesson. Being told that this part of his life was ‘none of my business,’ I recognised I was to release God’s love and He would do the rest.

I might know, see, sense, understand the problems and issues that a person has, a church has, a nation has, but it’s not for me to point that out and broadcast it. Rather, it was incumbent on me to release the Father’s heart of love. The lesson learnt was that I was to always remember that God loves us so much, that He gave His only son… (John 3:16)

So, the question to ask is, what does that look like, that sort of love?

For this young man (angry, rejected, asserting himself into a stereotypical model) love looked like complete loving acceptance. A Father’s delight in watching him be him. A Father’s blessing! This then released the grace into his life to become who he truly was, an articulate, kind, gentle, loving young man.

I do not believe that God worries about our or other people’s ‘issues’ as much as we do. He has it (and them) in hand. I think God is more concerned that people understand just how thoroughly He adores them. From the place of love and acceptance, people flourish. They need to learn of His goodness and kindness. Then, from that place, they step into relationship. The rest of the ‘stuff’ is between them and God!

‘For God did not send his Son into the world to condemn the world, but to save the world through him.’ (John 3:17)

That word ‘save’ is sozo, sode’-zo in the original Greek. It means to save, to deliver, to protect. It also means to heal, preserve, to make whole.

So Jesus came so that He might deliver, protect, heal, preserve, do well for us, and make us whole. THAT sounds like a good God to me!

Love works out a multitude of issues. God knows what each person needs.

It is incumbent on us to release His love. We must prophesy in accordance with 1 Corinthians 14:3, that we might strengthen, encourage, and comfort. The rest I leave up to the Holy Spirit, noting that the spirit has been poured out on ALL flesh (Joel 2:28 and Acts 2:17). So, if they have flesh, they qualify. All can receive, hear from and/or know the Spirit! How else would a person come to know Christ?

‘Therefore I want you to know that no one who is speaking by the Spirit of God says, “Jesus be cursed,” and no one can say, “Jesus is Lord,” except by the Holy Spirit.’ (1 Corinthians 12:3)

And so, this young man reading of God’s love for him every morning since I stepped out to bless him, felt accepted and adored for the first time in his life. He knew God adored him, loved him. In this place of being loved, he had settled gently into pursuing his dreams, while allowing the other to drop gently away. He had stepped into becoming fully himself.

Has he accepted Christ as lord and saviour? I don’t know. But he did taste and see God’s goodness, and that was what God wanted for him because…