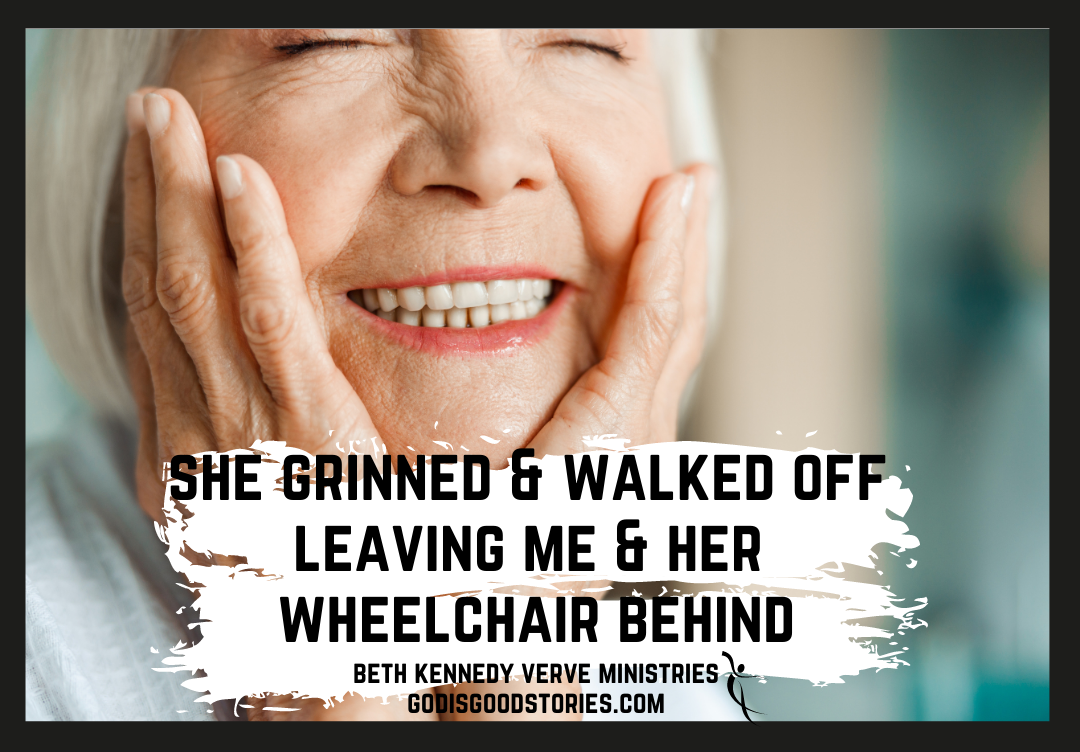 My last post mentioned how wheelchairs of all shapes and sizes are my ‘chicken line.’

One Easter Saturday, I found myself in a shopping centre about half an hour away from home, collecting a new pair of shoes for my 8-year-old daughter…

Walking into the centre, I had the uncanny sense that there would be a God assignment for me there.

I wandered around after collecting the shoes, feeling the Spirit of God say,

‘Stay. Go up the escalators.’

This ‘conversation’ came to mind as I walked, so I asked Him,

After going in and out of a few shops, I still had that sense that there was something for me to do, someone to meet.

A candle caught my attention in a shop close to the external doors, so I went to look. As I did, I felt Him say ‘buy it,’ so I did. As I left the store, I saw an elderly woman in a wheelchair, and I instantly knew that this was my assignment.

I approached her and the woman pushing the chair, asking if I could pray. They both said “yes” with great enthusiasm and so I introduced myself, knelt down and asked what the problem was.

The elderly lady in the chair swiftly pulled her sari thigh high, exposing a swollen, braced right knee. I knelt down before her and laid my hands on her knee and prayed, explaining as I did, that she may feel something like heat, a tingle, or even a wind. I also said she might even feel nothing. regardless, I asked her to let me know when and if she felt anything.

She instantly said she felt a wind swirling around her knee, with a warmth. I pressed on, praying, and told the story of A who had two broken legs heal (see below for related links). I continued on to explain that she had stood the first day, and walked freely within two weeks. I also explained how a healing could be instant or it could be over time, coming in ‘seed,’ form, needing time to grow. Thank you, Bill Johnson.

I kept praying and felt God’s Presence strongly as I did so. She said the feeling was intensifying in her knee. I laughed, saying it was intensifying on me too. I was flinching a little with the intensity of the Holy Spirit’s presence. She then mentioned the pain in her knee and so I rebuked the spirit of pain, and released the healing oil of the Holy Spirit. As I did, she said the pain completely left.

The anointing seemed to lighten somewhat, so I asked her about it and she said the sensation was lessening for her too. Since it had lifted somewhat, I suggested she check it out – by walking.

To my surprised delight, she agreed!

Her daughter-in-law and I lifted the footrests of the chair, and she rose shakily to her feet as she gently checked out God’s handy work.

She straightened some more, took a few more steps, smiled and nodded, reporting with a big smile, that the pain was all gone.

With that announcement, she grinned and walked off into the store, leaving me, her wheelchair and her daughter-in-law behind.

I turned to the daughter-in-law and placed my hand on the top of her back behind her shoulder, where I felt God said to touch her. I knew she was next, and as I touched her, her eyes filled with tears, remarking on the miracle that had just unfolded.

I looked at her gently.

She agreed, and I took her hands in mine. The sense of God’s love for her visibly overwhelmed her.

I repeated I had been there for a reason, for a purpose, because God loved her mother-in-law, and her so very much. It was a God appointment for them both, and it was now her turn to be prayed for because times had been tough.

She nodded, wept, and stood ready to receive, knowing now that…