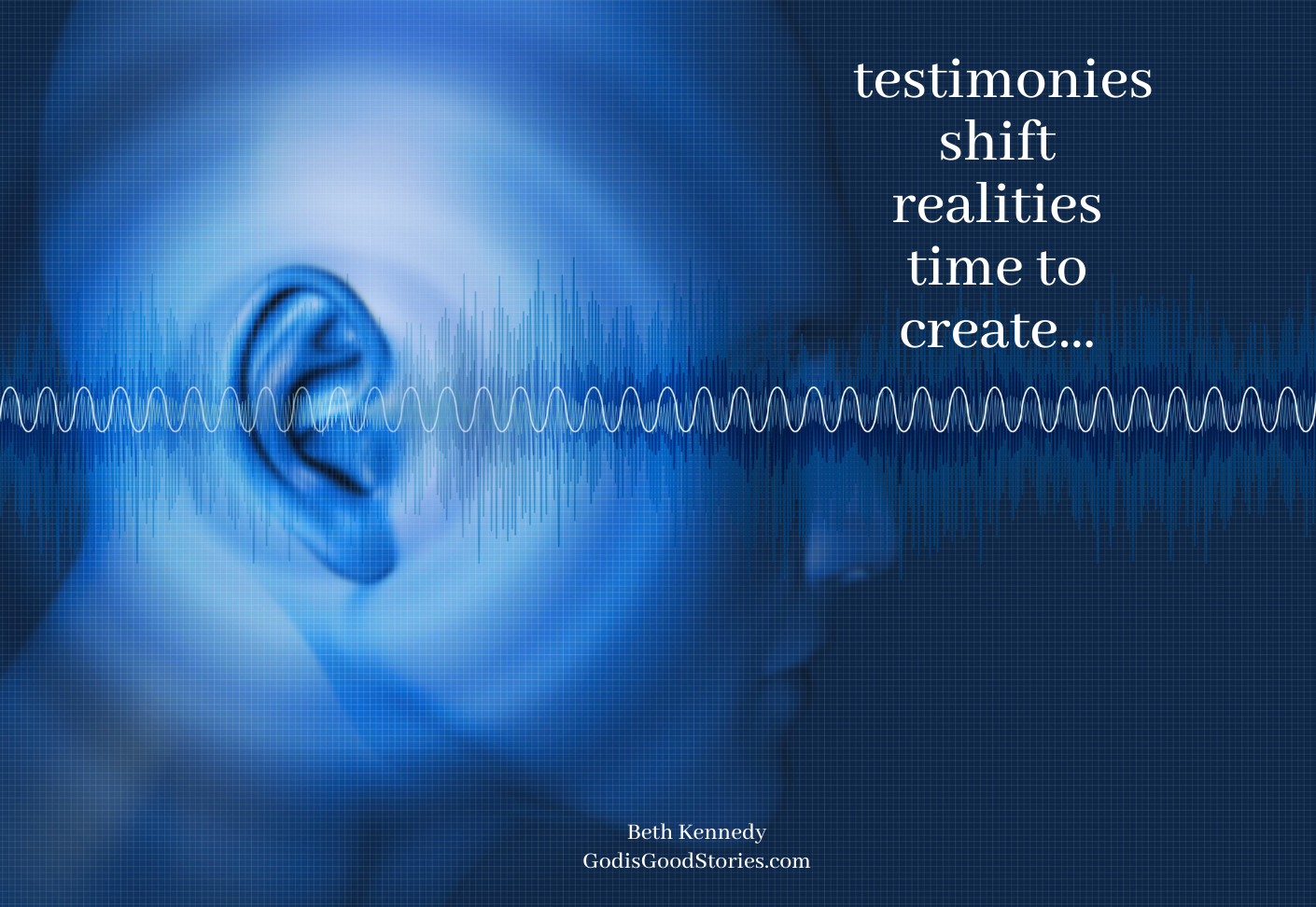 Could it be, as we share our testimonies of Jesus, our stories of a Good God, that creative power releases to heal and affect change all around us for the better?

To prophesy is to declare God’s intentions, His goodness.

‘But everyone who prophesies speaks to men for their strengthening, encouragement and comfort.’

To emphasise the importance of the prophetic word being released by all believers, Paul writes:

‘I would like every one of you to speak in tongues, but I would rather have you prophesy.’ (1 Corinthians 14:5, emphasis added).

Several years ago, when this testimony came in, my husband read it and something happened.

The story is about financial sowing in the Kingdom; yet, as Andrew read, a physical shift took place in his body.

‘For the testimony of Jesus is the spirit of prophecy’ (Revelation 19:10).

Years prior, Andrew received a diagnosis of an acoustic neuroma (a very rare form of a benign tumour in his aural canal). The tumour affected his hearing.

As he read this testimony, the ‘tone in the ear shifted.’

The point is, the story is not one of healing an ear, or the disappearance of tumours – it’s a financial provision testimony.

A completely unrelated Jesus story released power into his ear. The shift in the ear encouraged him so much that he decided he would read more, listen more, engage more, with the testimonies of a Good God!

If the testimony (or story) of Jesus is the spirit of prophecy, then can Jesus’ Presence ride forth on a story, causing shifts in something unrelated to the testimony’s topic and form?

Bill Johnson addresses the idea of testimonial precedent in The Power of the Testimony. No doubt he covers it elsewhere too. I’ve certainly heard him speak many times on the same.

In his book, Bill discusses how healings can take place when we repeat testimonies. From recollection, the healings referred to were similar conditions to the testimony released. For example: testimony of knee healed – knees healed. That being said, Bill Johnson might say a testimony releases more than just power for the same type of miracle. Indeed, there is resident power to heal at all times of all things. The fascinating aspect in this was that the release of power came upon an ear while Andrew read a financial testimony. In the world of precedent, this is something new.

Could it be, as we share our stories of a Good God, that power releases for more than just the miracle to which the story relates? Could it be that we can impact atmospheres, shift neighbourhoods, cause nations to turn through the power of repeating our testimonies?

All the more reason to let the world know that God is Good.

Here is a story of sowing into the Kingdom of God.

It started about a month ago. My wife received an invitation for a birthday morning tea. We know this family is standing in faith for financial provision, so we put $100 into her birthday card.

A couple of weeks later, our family and some others were in Geelong, helping my wife’s grandparents by laying gravel in their driveway. After we finished, my wife’s Pa gave us $100 as a way of saying “thank you”.

We sowed that money into the love offering for David Wagner.

Then, at a conference where our catering business was supplying food, we had sold only half of the food we prepared! So, we were giving away pies, pasties etc. in the afternoon to whoever wanted something to eat rather than throwing them out. One person wanted to pay, and I said ‘you can’t pay, but you’re more than welcome to make a love offering…’ Later I found out that he gave my wife $100, we sowed that too back into the love offering for Bill Johnson and Leif Hetland.

The next day of the conference, we sold nearly EVERYTHING! The little left over, we made into hampers to give away. Such Fun!

So last Tuesday I was working in a factory area selling coffees, when a factory boss described me as being like a “white light” and he ordered an extra $100 in coffee.

Last Wednesday, we went to my wife’s sister’s house to cook her some dinner. She is pregnant, and she is not feeling well sometimes. We cooked 7 meals, plus 3 serves of fried rice; our kids came too and slept on the couch. My wife’s sister and her husband came for dinner last night, and gave us a thank-you card, with a Coles voucher in it–value: $100.

Makes me wonder what would happen if we sowed $500?!

What stories of God’s goodness are you keeping to yourself? Is it time that you shared them?

Perhaps if you tell the stories in your own life of a Good God, you may release the Spirit of Prophecy, and with it, a tumour may shift, a leg may grow out, or a heart may heal. How will you know unless you share of God’s goodness? I hazard a guess that if you start, it will release a Power, and that Power will heal because…