Son-shine at the hairdressers Part 1 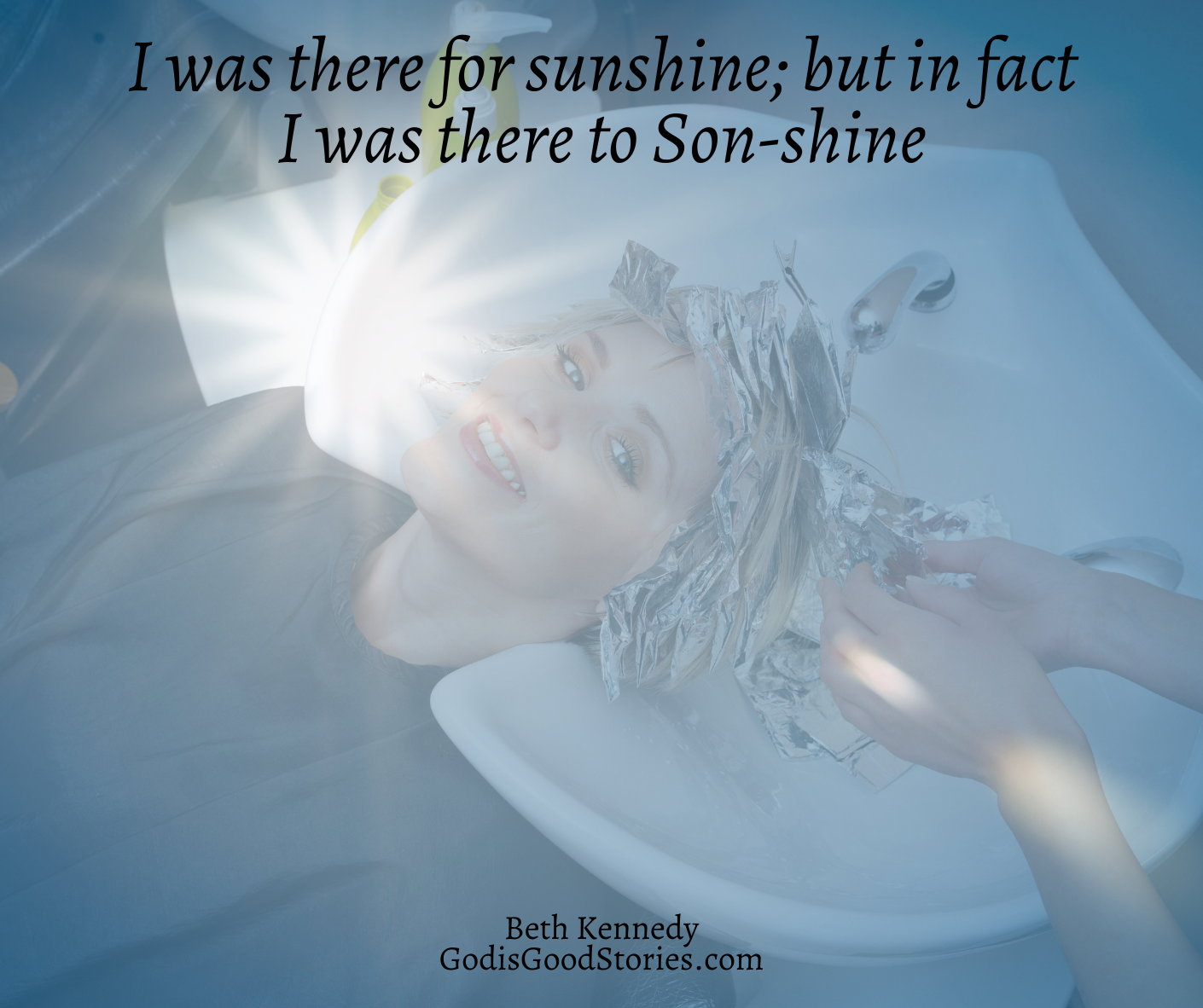 God loves hairdressers. He turns up in their salons regularly.

I was at my local hairdresser’s several years ago. I was getting “sunshine” for summer. *Belle was my go to girl for nearly 8 years at this stage. She knew my story, and she had heard the story of many others who had overcome known or suspected infertility.

Belle was and is a beautiful, clever, smart, kind, very sensible, courageous woman. She was this hairdressing salon’s youngest manageress ever! She was completely self-sufficient and managed life well.

At the time of this story, she had known for a long time I was a Christian. She watched me get frustrated with everyday Christianity. She also saw how I made the choice to believe what God’s word says about Himself, about Jesus, and what He had to say about me. Belle witnessed some of my earlier stories unfold in the salon. In particular, she watched one of my earliest challenges in The nose that could not smell; she saw the story of a baby with a toothache  unfold, and she knew about the salvation story.

God had been very busy in this salon!

Over time, Belle became more open to me and my faith, often asking questions as we chatted. Being a capable young woman, she saw no need for God in her life; however, she showed a natural curiosity.

The interest also went beyond my God stories. She said she watched my children and was interested in my views about life. When she asked me these types of questions, I would take a deep breath and ask God to give me His wisdom for my response. I would then answer as best I knew how, acutely aware that we ‘witness’ everywhere we go, even when we say nothing.

On an earlier occasion, I had finished telling her a story about a girl getting pregnant immediately after prayer. She listened as always, but then, out of the ordinary, she whispered, asking if I would pray for the same miracle of fertility and conception that so many others had experienced after prayer?

Touched, I gently reached around the chair and immediately prayed for her. I felt nothing much, but I believed God would honour the prayer as He had so many times before with people who wanted to start a family. I continued to pray for her after this day, and even called occasionally when I felt led to, just to encourage her in her conception journey.

To be honest, I was a little surprised she was not pregnant straight away. Most people I had prayed for had become pregnant immediately after the prayer. Regardless, I continued to encourage and pray.

On this particular Saturday I was there for some “sunshine” when Belle quietly let me know her specialists had diagnosed her with a hormonal imbalance–she needed higher levels of progesterone.

She came around and sat before me and said that she was planning to take me up on the “coffee and chat with prayer” offer I had made many months ago.

I looked and said, “that would be great, and I am happy to do that, but let’s pray quietly now!”

I took her hand, invited the Holy Spirit to come and, well, He did!

His presence was so strong He overwhelmed me, and I cried in the middle of the salon.

Belle looked concerned, so I explained He had come in a strong, tangible way. I prayed, declaring hormonal balance, declaring fertility and asking God to do for her what He had done for me.

I knew not to pray double portion since the last person I did that for had ended up pregnant in her next cycle with twins!

When I stopped, and it was only brief, I asked her if she had felt Him too.

“I did. I felt warmth flow all over and through me, and it was amazing. It went right through me!” she gasped.

… the sun of righteousness shall rise with healing in its wings (Malachi 4:2)

Encouraged, I said that what she felt was the healing power of the Holy Spirit. I believed she would be fine now, yet all the while my brain was screaming at me, “what if the test results she’s having in a month show the hormones are still unbalanced?”

Now, it’s important to note. This 8 year relationship was not a relationship “to convert,” but a relationship between two people doing life. One a Christian; and one that is not (yet that I know of). However, after years of just being me, telling her about Him, she was now open to His influence. The time came for me to step out and pray. Belle knew my faith; she had heard the stories; and when she was ready, she received.

AND BOY DID SHE RECEIVE!

She was so open as I prayed. I am sure it was her hunger that drew Him in such a powerful way. Her hunger and His desire to prove Himself strong for her were a dynamic duo. I just had to effect the introduction. He did the rest.

Jesus had turned up magnificently! I was there for “sunshine”; but in reality I was set up to release some “Son-shine,” and what a privilege it was!

Once home, I had fears of failure, even though she had felt the heat surge through her body, much like what had happened to me all those years before.

And in the fear of failure, I reminded myself that the issue was now with God. I would continue to pray as prompted by God, and I would continue to believe, knowing that although she may not get pregnant in the very next cycle, she also just may, but regardless of outcome and timing I knew she would conceive at just the right time because…

*not her real name