How to grow deep in transition 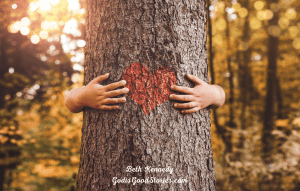 Transition is an unusual and challenging time.

In child birth, “transition” is a time of intense focus. Past comforts long gone; there is simply ‘here and now’ with (hopefully) the encouragement of others to carry you through.

The old has passed away.

The new is yet to come, with all its… all its… well, all its newness.

In this season, some may seem intensely judgemental, even harsh in their critique. Motives assigned; unfounded in Truth, yet views held tight all the same. Views, I add, grounded mostly in personal insecurity.

Transition can be a time when critics hit out. Words spoken behind backs of intended targets, causing sadness and pain when uncovered. Mutterings and actions have the power to curse. Christians rarely grasp the power held in their tongue. Or perhaps they do. Regardless, they take aim anyway.

Then there are people who fill us with a sense of love and wonder at their kindness. The ones that run by our side, even though we grow weary. You know not what to say anymore. They remain to encourage anyway.

Years ago, in a different time of transition, it was wildly windy as I drove out of a shopping centre carpark. As I drove, I noticed a tree, supported tightly on either side by wooden stakes. The tree was not free to move. Firmly secured by well-meaning council workers, it had no means of standing on its own. The wind was fierce, so you would think such tightly held binds would keep the little tree stable. You would think the tree had grown well with such support. Instead, both stakes and tree blew horizontally in the violent winds. The root system was non-existent because of the extreme confines of days gone before. Diligent protection afforded the tree had left it inept and incapable of standing alone. In its fall, it took the stakes with it. The entire system, well meant, had failed.

Other trees, also staked, blown by the same wind, were free to move within the confines of looser supports tied to their stakes. These trees were being badly buffeted; however, tethered more loosely, they could remain connected to the strong wooden stakes. There was room for them to rock, yet there was support. They were not so tightly bound they created a fall for all. The gently staked trees bent in the forces, but could stand back upright once the winds subsided.

Being a gardener, I knew those trees free to sway in the winds, had developed the resiliency and depth of root system that allowed them to stand in the forces they now faced. However, I also knew that in such fierce winds they still benefitted from the supports provided by the strong stakes by their sides. In time they would standalone.

I also knew those trees had much stronger root systems than their external growth showed. I knew they would continue to stand in the storms of time. Because they had the strength of the stakes by their sides as they grew, they had stood in times of extreme winds, and because they had not stood alone, they had depths of strength yet unseen. This gave them the greatest chance of longevity. Their root structures, and strength to stand, meant in drought and flood they would be firm. They had not stood alone; neither had they insisted on being held up completely reliant.

Had the council planted either tree without a stake, they would have had no chance of either external growth or hidden root growth. They would have struggled and fallen either way.

It made me think of how, when the winds of change buffet us.

We don’t need people to fall over with us, or to climb in our pit when we fall. For if our supports bend with us too far, we all fall together.

Indeed, we need those that stand by us; ones who will give support while allowing freedom to move in the wind. It is those trees, being buffeted, yet supported in the winds, that grow strong and tall. As they grow they develop a canopy, which joins with others that create a network of support for all the ecosystem that coexists around.

The recent storms and winds that thrashed Melbourne last week have caused me to ponder these things again and again. There are thoughts and whispers of movement on the winds of change that suggest more to come. We need those that have been growing deep, growing strong. We need those who have grown positioned to drink deep of the waters that flow, which will allow them to grow tall into the trees, God has called them to be.

The current storm we all walk through is much like the extreme storms Melbourne has had to endure.

After our storms, fallen trees were everywhere to be seen. Most had little to no root system. These trees had clearly received much shallow watering for quick, superficial growth. In the test of time, they fell, having grown too fast for the depth of root systems below.

There is an urgent need to grow deep. Many have grown hidden, positioned with supports by their side, reaching into the depths of God. They have no perceivable growth, but there is a depth to them only the discerning can see. They hope to be ready for the structures to come.

In transitional times, it is critical to know God’s love and acceptance. In these times, He will bring others by your side to remind you of your worth.

So hold to the encouragement of the past, for it is essential to gird oneself for the race that will come.

And hold to the encouragement that comes in this season, especially from those we see by our sides, holding us fast.

In the transitional time of waiting, when the old has passed away, and the new is yet to come, we cannot overestimate the importance of standing with others by our sides.

Community is ever more increasing in its importance, so find those that will stand by your side and cause you to grow.

Seek the ones who will stand firm, like the stakes that stood by the sides of the second tree I saw in the winds. These stand firm in the Truths, and refuse to fall. These will give you the room to be you, to be strengthened, yet buffeted about. Their strength and grace is in their ability to stand firm in their faith, regardless of circumstances. Ones whose bonds allow you to shift and to move to find your feet, yet hold you steady enough until you are ready to grow tall into the tree you are. 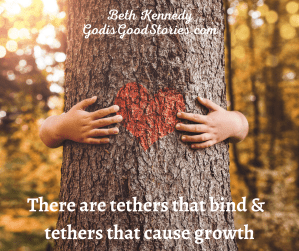 Those that cause growth will stand by your side and say:

They will see that though you are the smallest of all seeds, yet when you grow, you will be the largest of garden plants and you will become a tree that the birds may come and perch in its branches (Matt 13:32) because…